Recently, when Google pulled the plug on Picasa, it was suicide. Picasa had been maintained, it was stable, it was functional. They made way to lure people to Google Photos by discontinuing support for Picasa.

Apple pulled the plug on QuickTime for Windows today though, and that was murder.

QuickTime for Windows has never been exactly stable or secure. It’s one of the apps I always remove unless the client is absolutely “sure” they need it for some reason. (Did you see the quotes there? Most people think they need something only because they recognize the name — it’s almost never about whether they actually use it.)

I don’t think I’ve ever been told by anyone that they actually needed QuickTime after it was gone. It doesn’t really provide anything more than a codec to display certain file types that nearly every current media package already supports. The player itself is poorly designed and lacks core features and functionality that were included in Windows Media Player for Windows 95…over 20 years ago.

Well, this time is different. When Zero Day Initiative (ZDI) contacted Apple 6 months ago about two separate security vulnerabilities. Apple acknowledged receipt then sat on the vulnerabilities until last month, when Apple told ZDI that they had decided not to support QuickTime for Windows anymore. Then Apple sat on it for another month to “coordinate” their announcement of deciding to stop supporting QuickTime for Windows until ZDI announced that it had these vulnerabilities that would never be patched. That’s like waiting for people to finish eating before telling them the food is poisoned.

As of posting, QuickTime for Windows was still available for download through the Apple website and they had not yet published any indication that they will no longer support it. They might not post a security advisory indicating that it is no longer supported. They don’t go out of their way to inform Mac users when their hardware is no longer supported, those users just don’t get updates anymore and they have to figure it out for themselves or read the very fine print on some webpage they’re unlikely to ever visit. That said, it’s been over 6 months and they’ve told prestigious security organizations that they are abandoning QuickTime, so I would remove it from your devices immediately.

@AppleSupport where can we find information about Apple ending support for QuickTime for Windows? https://t.co/FLRzQiCNhP

In their defense, anyone that checked out the security history of QuickTime would have removed it (like me) years ago.

On 2016-04-21 they updated the QuickTime for Windows page to redirect to a page that mentions in the fine print that QuickTime is no longer supported by Apple. It’s still available from many online sources, and will not be removed automatically by Apple Software Update, so it’s up to you to secure your computer. 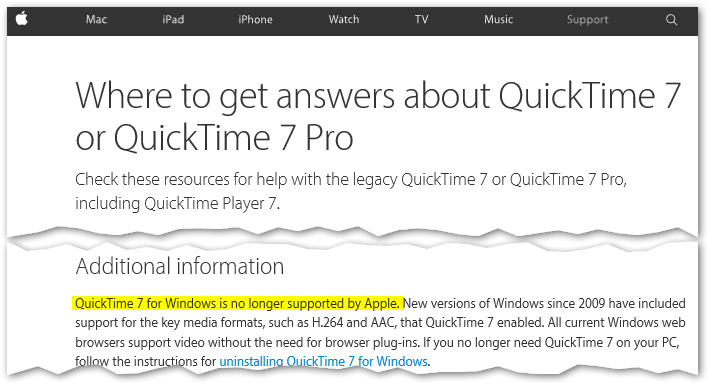 Remove QuickTime from your Windows devices. The normal Uninstall Program functionality will remove QuickTime in a few seconds, then, just to be safe, reboot the computer.

Keep it clean out there,

One thought on “On the Death of QuickTime”