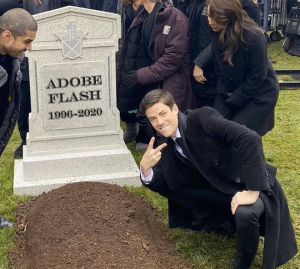 Adobe Flash: You Will Not Be Missed

Flash is going to be going away in about a month. Adobe announced the end-of-life (EOL) for Flash about two and a half years ago. Microsoft will be removing the built-in Windows version in 40 days. Flash is currently built into chromium-based browsers (Chrome, Edge, Brave, Vivaldi and so on), and will no longer be included at all in a couple weeks, and the only other browser that has supported it (Firefox) will block it in late December. By mid-January no browser will support Flash and any website that relies on it will have major compatibility problems. Facebook game players have been terrified of this because it’s going to finally kill Farmville.

HTML5 is the replacement for Flash. Flash is closed-source and historically extremely insecure – directly responsible for over half of all malware infections. Flash was originally designed by Macromedia which was later bought by Adobe. Adobe’s entire system has always been designed around closed-source and limiting access to how their software works, which means that it doesn’t have the ability for outside code review or security analysis. HTML5, on the other hand, is open-source, designed by the same people that designed the Internet itself. It does have a digital rights management (DRM) stub which allows publishers to prevent data from being copied (like Netflix), but it’s nowhere near as closed as Flash has been. 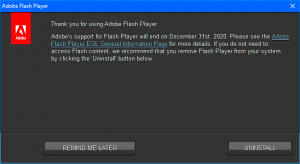 If you don’t want to wait, you can eliminate Flash yourself using the Adobe Flash Removal Tool.

That’s all for now folks. Keep it clean out there. 😉